The Houses of Parliament and Big Ben
(Palace of Westminster) 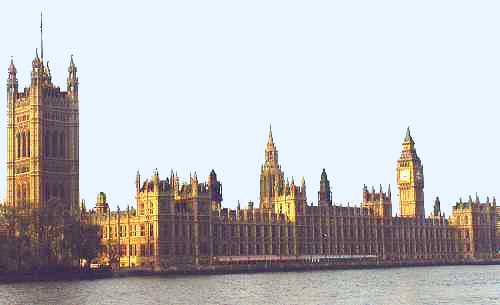 Officially this dramatic neo-gothic building is called the Palace of Westminster, but it is better known the world over as the Houses of Parliament.

The building that you see today actually only dates from the 1840s - it was designed by Charles Barry and Augustus Pugin after most of the first Houses of Parliament burned down in 1834. But the history of the site dates back much further....

Edward the Confessor built the Palace of Westminster on the site in 1049 and the first Parliament was held there in 1275. Westminster then became the permanent home of Parliament after Henry VIII (1509-47) chose to live in Whitehall in 1532.

The building itself contains over 1,000 rooms, 100 staircases, 11 courtyards, over 3km of passages, 8 bars and 6 restaurants. It also contains the only remaining part of the original Palace of Westminster, Westminster Hall (4).

You enter the Houses of Parliament through St Stephen's Porch (7) and then pass into St Stephen's Hall (6). This hall is a replica of the original chapel built by Edward I (1272-1307) which is where the House of Commons met until 1834. The hall then leads to the Central Lobby (5).

The massive Westminster Hall (4) is to the left of St Stephen's Hall. It dates back over 900 years and measures a vast 240ft by 60ft. The oak hammerbeam roof dates from the 14th century and is considered by many to be one of the best preserved medieval achievements. You can only go into the hall as part of a guided tour, but you can glimpse it from St Stephen's Porch (7).

A visit to the Jewel Tower should tell you everything you need to know about the Houses of Parliament, but if you do want to go on a guided tour, you should contact either your local MP or your country's embassy who should be able to arrange a place for you.